I had a lovely phone call from Shirley Suettinger in Wisconsin a week or so ago. At the end of our conversation, she said “I have a suggestion.” I love to hear that – because there’s always something interesting coming – and this was no exception. Shirley told me she uses a potato peeler to remove the film from her paintstiks rather than a paring knife. 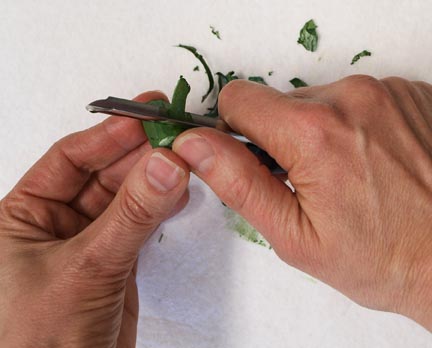 Talk about your V-8 moment! This ranked right up there with Nancy K telling me to paint with the side of the stick! Now you may wonder why I would be so excited about a vegetable peeler, but I think it’s a wonderful idea. (And, I think I can safely take one in my carry-on luggage without the airport security folks confiscating it from my bag.)

The best part about using the peeler is that it removes the film and just a bit of the soft paint underneath. Not too little, not too much. Just right for getting under that film!