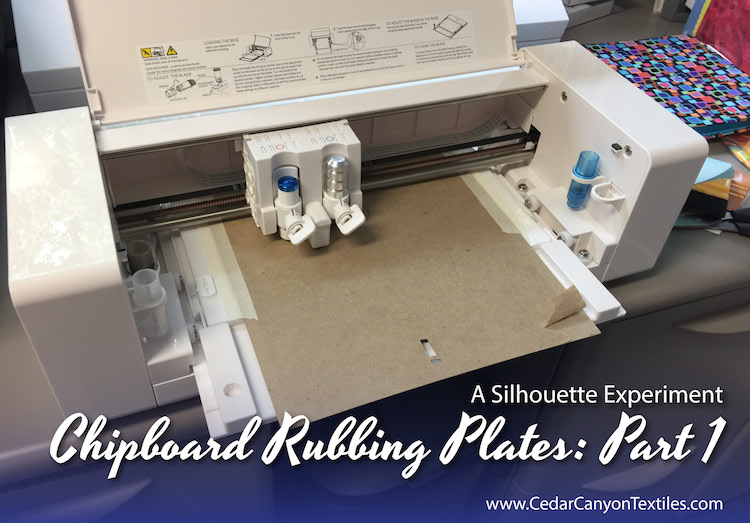 In the last newsletter, I mentioned that my new Silhouette Curio machine had arrived. (Yay! I love new toys!) The Curio is designed to cut thicker materials, and I was chomping at the bit to see how it would do cutting custom Chipboard Rubbing Plates.

In case you’re new here at Cedar Canyon, I love textured surfaces (a.k.a. rubbing plates) for adding color and patterns to fabric with Paintstiks. But that’s for another day. Let’s get back to the Silhouette machines. 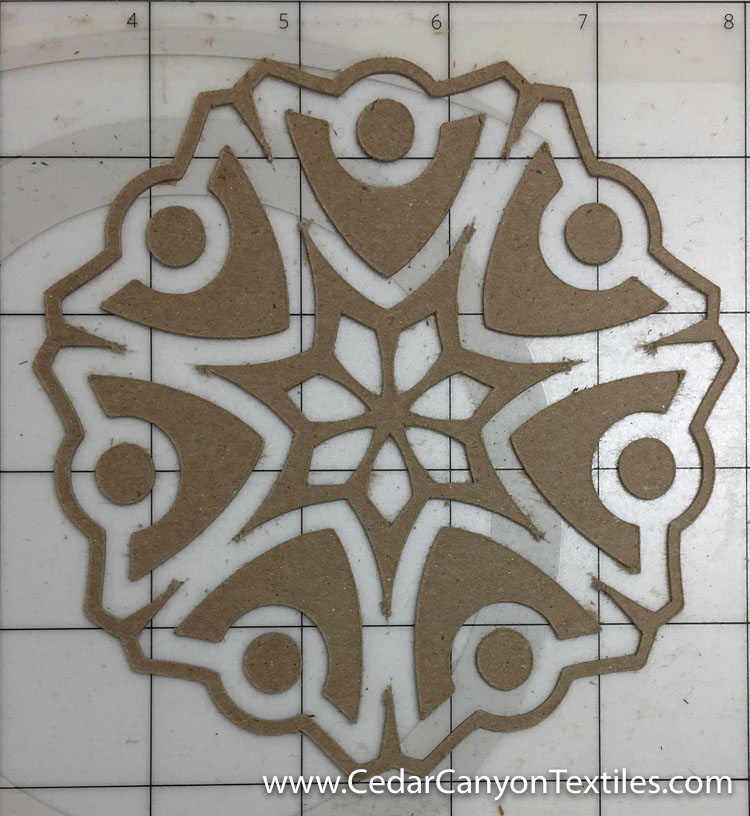 I hate to admit it, but I’m not terribly patient. So… without really having a clue about how the Curio is different than the Cameo, I hooked it up and sent a design over to the machine. No, it was not a simple design. No, I didn’t go through the Test Procedure I recommend in my Silhouette for Fabric Art online course. (That would take time – heaven forbid!) 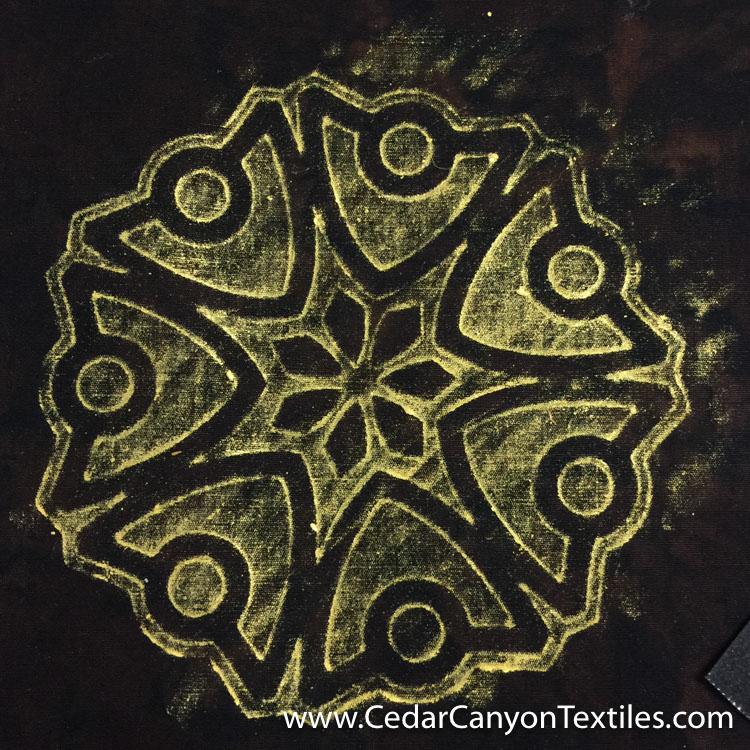 Long story short, I did get the machine to cut after several iterations, and I made a quick and dirty Paintstik rubbing to prove to myself that all was good. Then I promptly set the machine aside and went back to whatever else I was doing. (I hope I’m not the only one that does this!) 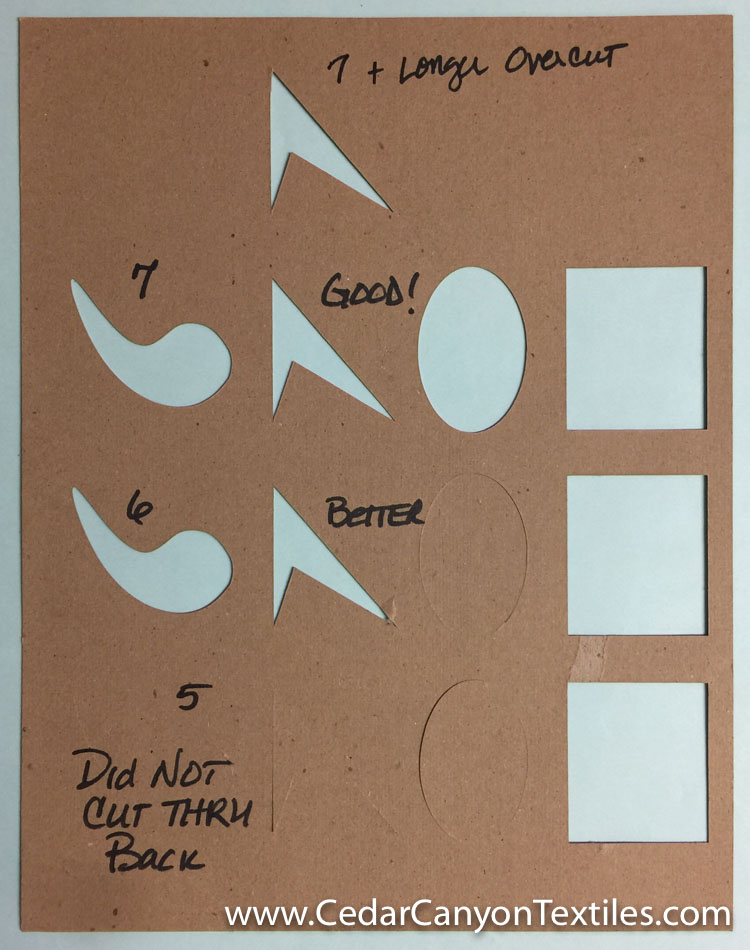 Testing Chipboard with my Cut Settings Test file and process

Several of the students in the current Silhouette for Fabric Art course asked if I would post my Chipboard settings for the group, so I thought I should do a proper test. I grabbed my Cut Settings test design, a copy of the worksheet, and got to work.

With the settings from my tests in hand, I set out to cut my design again. I figured I should test both machines (Cameo and Curio) to see how they compared. My Cameo was hooked up to the computer, so I started with that. 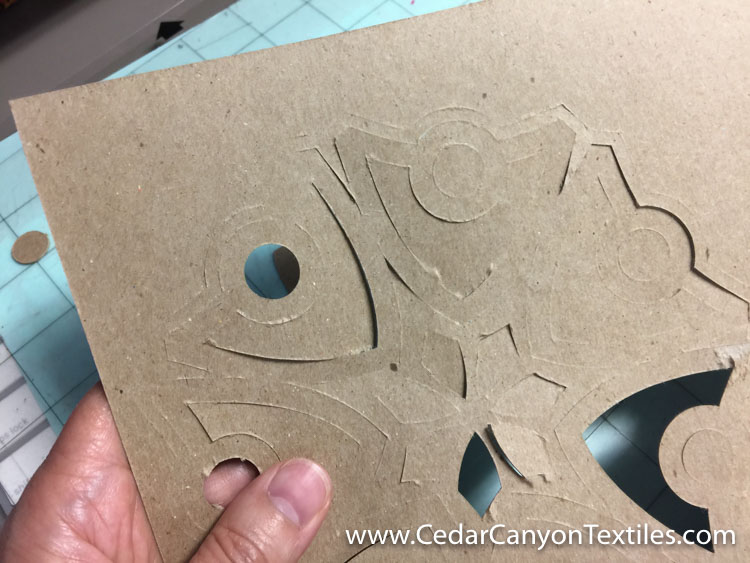 Uh oh… those settings worked on the test design, but not on my complex Kaleido-design. Back to the drawing board… 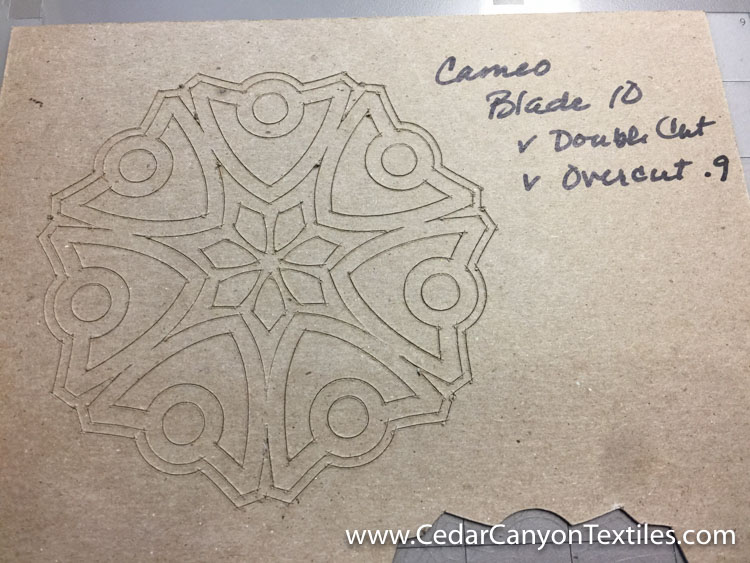 On the Cameo, I got to a final result without any trouble. On the Curio machine? Not so fast.

The Curio has an additional variable – the height of the stack of platforms – that creates a whole new layer of tests to the list. As I said, I have LOTS to learn! 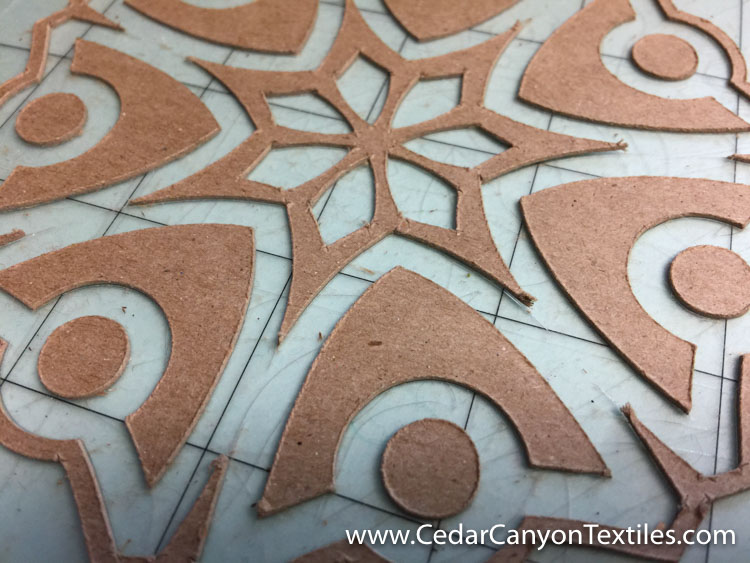 Here is a close-up photo of the chipboard that I cut on my Cameo. As you can see, the chipboard gets torn up a bit at the sharp points. Hmmm… I wonder if anyone makes this stuff with a coating on one side? Oh boy, more stuff to learn! 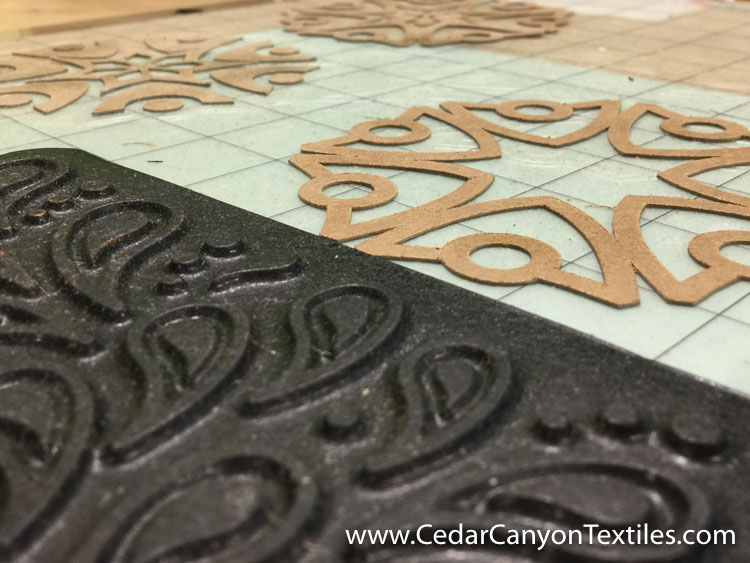 When I was getting ready to do some painting with the chipboard rubbing plates, I was curious to see how the depth compared to the molded plastic rubbing plates that I used to manufacture.

Wow. Not even close! After digging up some specs on both, I realized that the Cedar Canyon Rubbing Plates were almost 5 times deeper than the chipboard. No wonder they work so well! 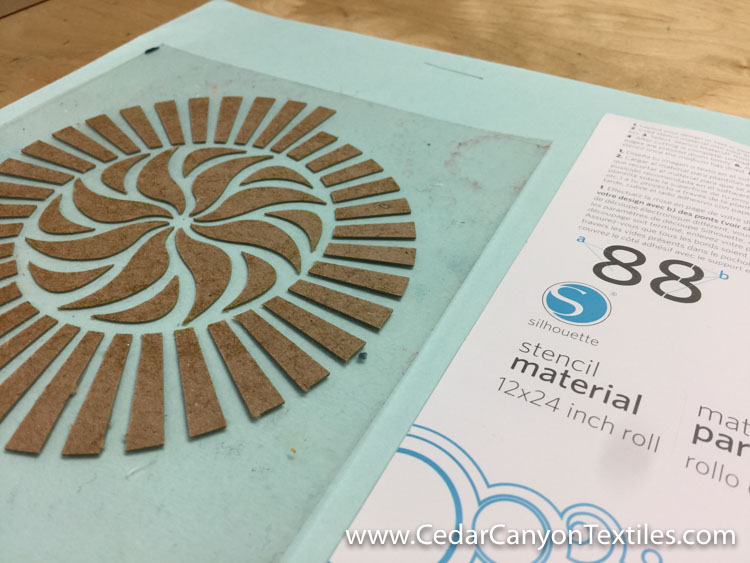 Once the chipboard is cut, it needs a permanent home. I’m certainly not going to leave them stuck to my cutting mats! There are a few tricks to getting this to work properly, so I’ll tackle that in another post.

Finally, I grabbed a piece of black fabric and a couple of Paintstiks. The shallow depth of the rubbing plates is definitely if you want really clean rubbings. But, it is possible – and very cool to be able to create a design, cut it out, and make custom chipboard rubbing plates!

I’m still running tests on my Curio (with very mixed results!), but I’m happy to share what I learned about cutting Chipboard Rubbing plates with a Silhouette Cameo. Here are the settings that worked for me:

What about the Curio?

I’ve had reasonable – but not totally consistent – results using the same settings on the Curio with a full complement of 6 platforms. But I’m still testing, and I’m not ready to give a firm recommendation.

I’ll keep working with the new machine, locate some coated chipboard and report back in my next blog post. Until then, you’ll just have to run your own set of experiments to create Chipboard Rubbing Plates with YOUR Silhouette machine.

If you have a question – or some wisdom to share – leave a comment below. I’m all ears!